Vaccines provide immunity by stimulating a set of naive B cells to become antibody-producing plasma cells against a specific pathogen. However, plasma cells have varying lifespans, which is why some vaccines, such as measles and HPV, require boosters, because once all the pathogen-specific plasma cells die, immunity ends.

A team of researchers, led by Wing Lam of Washington University, sought to answer these questions about plasma cell longevity in their recent study.

Lam’s team collected CD138+ cells, which are predisposed for antibody production, from the spleen and bone marrow of mice, and used flow cytometry to sort them based on the uptake of the fluorescent glucose analog, 2NBDG.

Using FlowJo’s flexible data visualization and gating tools, the data were used to further divide the cell populations based on the expression of B220, a differentiation marker. Dr. Deepta Bhattacharya, a researcher on this team, commented that FlowJo’s superior analysis capabilities are the reason for its continued inclusion his studies.

Ultimately, the plasma cells were grouped into four distinct subtypes, and their lifespans were measured through pulse-chase experiments with bromodeoxyuridine (BrdU). It was found that plasma cells which uptake 2NBDG (2NBDG+) have longer half lives than those which do not (2NBDG-). 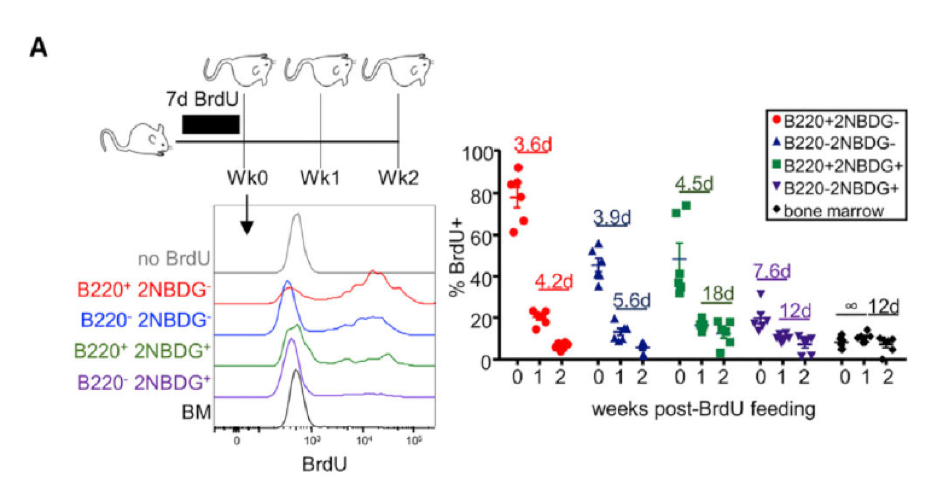 Figure 1: Mice were fed BrdU in drinking water for 1 week and assessed for incorporation and retention at 0, 1, and 2 weeks post-BrdU withdrawal. Half-lives of each plasma cell population were calculated at weeks 1 and 2 of the chase period and are shown above. It was seen that overall, 2NBDG+ cells had a longer half life.

Lam’s team previously linked glucose metabolism with plasma cell function by showing that glucose is required for antibody glycosylation for proper function and energy for survival. For this study, they delved into amino acid metabolism, starting with amino acid transporter CD98.

CD98 was highly expressed in 2NBDG+ cells relative to 2NBDG- cells, evidence that low amino acid uptake in 2NBDG- cells is correlated with their shorter lifespan. 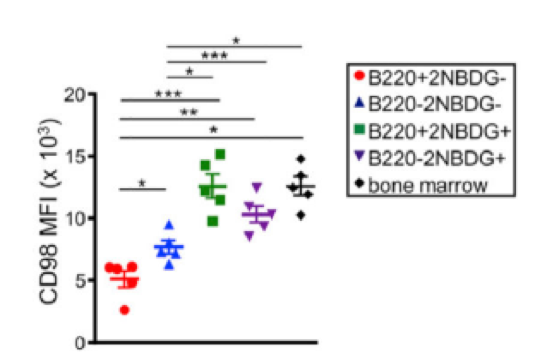 Figure 2: Expression of CD98 is shown quantified as mean fluorescence intensity (MFI) values and each point represents cells from an individual mouse. Overall, 2NBDG+ cells are seen to have a higher expression of CD98.

Moreover, 2NBDG+ cells consistently produced more than 2NBDG- cells regardless of amino acid concentration, which linked their uptake with enhanced antibody production and a longer lifespan. 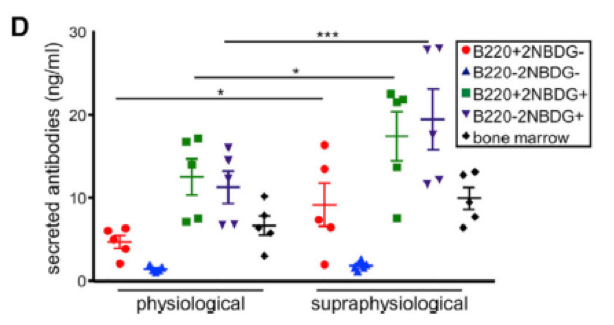 Figure 3: Antibody secretion analysis of plasma cell populations cultured for 24 hr either in physiological media or media with supraphysiological concentrations of amino acids. It was seen that 2NBDG+ cells had a higher amount of secreted antibodies in both conditions.

The team studied targets of the ER stress protein ATF6a in relation to each subtype and whether the 2NDGB- cells were undergoing apoptosis at a higher rate than usual. There was no correlation found in both cases, suggesting ER stress may not play a role in lifespans.

Finally, protein degradation differences between subtypes were studied. It was revealed that 2NDGB- cells had a higher rate of protein degradation. Taken with the fact that apoptosis and ER stress was consistent across all subtypes, it was concluded that 2NBGD- cells compensate for a higher misfold rate by degrading protein faster, and thus keeping ER stress responses low.

Single cell RNA sequencing and t-SNE revealed nine clusters with each preferentially expressing 352 genes, which excluded immunoglobulin transcripts. Each of the interrogated subtypes were interspersed throughout the clusters, which made clear that the metabolic differences were unrelated to mRNA transcripts.

Moreover, including immunoglobulin transcripts in the analysis showed that antibody isotypes were also unrelated to plasma cell longevity. SeqGeq was used to visualize the immunoglobulin isotype data from the t-SNE analysis in an intuitive way, similar to how flow cytometry data is presented. 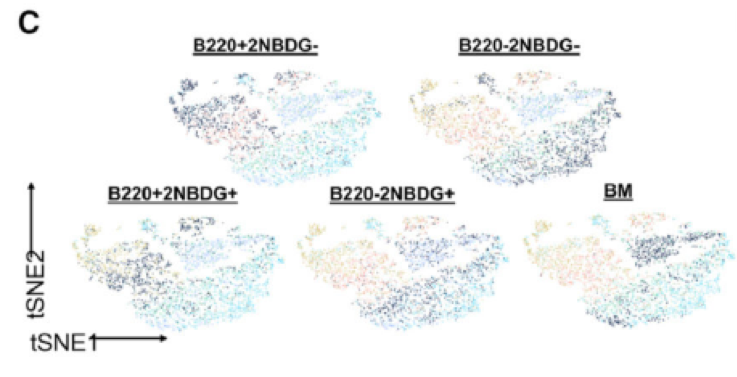 Trial and Error, Then Trial Again

The team had proposed a threefold hypothesis where metabolism, ER stress and transcription profiles all playing a role in plasma cell longevity. The results showed a strong correlation between increased amino acid uptake and metabolism and a longer lifespan - while unsurprising, given that metabolic mechanisms are usually independent of RNA transcripts, it was not the result they were expecting.

Lam and team are already hard work studying why certain cells begin higher glucose uptake, eventually become longer-lived. They are also researching which stimuli vaccines could include to promote the metabolic processes required for plasma cells to ensure longer-lasting immunity.